Since the recent floods across the UK, people have been left devastated by the aftermath. The flooding may well have caused some catastrophic damage to property, surrounding facilities and appliances, including oil tanks. Many domestic, commercial and agricultural properties are fitted with oil tanks that are based outside, so the recent floods in many parts of the UK are likely to have left people with oil tanks filled with water. 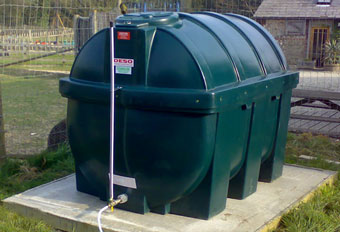 Water accumulation usually occurs after gradual condensation build up and rainfall and ultimately this leads to serious problems. If you suspect that water has built up inside your oil tank, there are a number of things you can do to check and reverse the issue. Oil tanks should be checked over every now and then to ensure that nothing is out of the ordinary. It’s vital that the openings on the oil tanks are securely shut at all times to prevent condensation and rain water from easily accessing the tank.

You should also closely monitor the seals for the openings to check whether or not they have been damaged. Damaged seals are nowhere near as effective as a fully operational seal, so it would be wise to shop around for a new one if the current seal is cracked or damaged in any way. Finally, thoroughly check every part of the tank for damage. This could be a slight crack, a split or gradual rusting over time. Damaged tanks can expose higher temperatures to the atmosphere and subsequently increase the chances of condensation build up.

If you’ve managed to identify any kind of damage on the tank, the next step is to see if there is a significant accumulation of water. There are plenty of products on the market that can help you to check for water accumulation such as Kolor Kut, a paste that measures the amount of water in an oil tank.

To use the water-finding paste, simply apply it to a clean, dry stick and dip it into the tank until it reaches the surface. Wait for approximately thirty seconds before taking the stick out. The paste will turn a certain colour if water is present in the tank.

The depth of the colour will give you an idea of how much water is present in the tank. If there is a slight colouring on the paste and you are aware of long term damage, this may not be too much of an issue although you should always have the damage inspected and repaired. A very small build-up of water can be expected over time but water accumulation becomes an issue when it reaches the outlet of the oil tanks. Water can be easily removed using a hand pump but should always be appropriately disposed of through local authorities to prevent contamination.

Once the water has been removed and disposed of, you can get in touch with professional oil tank engineers to thoroughly clean the inside of the tank. This ensures that all the water that was previously in the tank has been removed.