We’ve all heard about the effects of greenhouse gases in the news recently, especially as the call for sustainable, eco-friendly energy alternatives continues to gain momentum. Climate change is one of the many large-scale effects of fossil fuels being used throughout history, though there have also been plenty of predictions made by experts in recent years regarding the future of the entire planet. A report from the Intergovernmental Panel on Climate Change found that there were a number of significant consequences we could soon experience as a result of our current obsession with fossil fuels. Here are five the most significant findings found in the IPCC’s report: 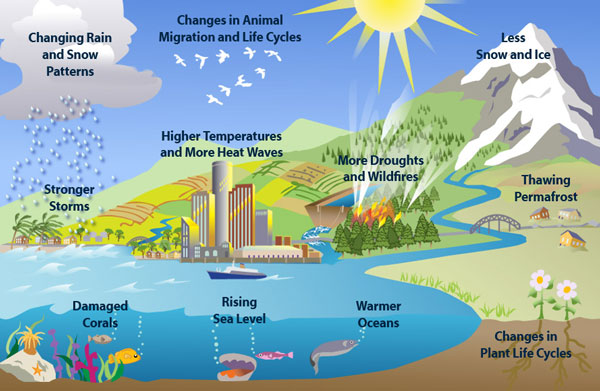 Temperatures are likely to rise dramatically over the next few decades as a result of greenhouse gases all over the world, which could have some devastating effects on the population. Not only are we likely to see longer and more severe heat waves in the hotter parts of the world, we could even witness countries that have never had an issue with heat waves in the past experience similar weather patterns. Whilst heat waves are commonplace throughout the summer months in many different countries, they have caused many deaths as a result of a lack of preparation and know how when it comes to coping with heat waves.

Droughts are treated as a natural disaster and are still frequent in many countries with warmer climates. As a result of climate change, many regions will experience longer droughts that may have a disastrous effect on agriculture. What’s more, the number of droughts experienced in colder regions may increase during the summer, which could be a serious issue for farmers who are reliant on mixed weather patterns to grow their crops.

Rainfall is likely to increase in various parts of the world, which could cause water levels to rise as a result of heavy monsoons. The heavy rain could contribute to flash flooding across all parts of the world and not just to those that are most vulnerable. Flooding causes all kinds of damage to property and farmland, especially in lowland areas. The UK witnessed some of the worst flooding in living memory this winter and this could be an indicator of what we might have to expect over the coming years.

Oceans are under serious threat from the gradual build up of greenhouse gases in the atmosphere. Firstly, ocean levels are likely to rise over the next few decades which could contribute to the disappearance of land. People would be left homeless as a result of flooding, forcing them to move elsewhere. Secondly, the Oceans will warm up over time and become more acidic as a result of acidic rainfall. This could have devastating effects on marine wildlife.

One of the most documented aspects of climate change is effects it could have on the Arctic. We have already witnessed videos of polar ice caps melting and glaciers becoming thinner as a result of melting. Snowfall is likely to decrease in the Northern Hemisphere, whilst Arctic wildlife could be on the verge of extinction.

Katie Speelman is passionate about healthy living and is proactive in spreading awareness about the benefits of greener living. She also writes on behalf of ISO Energy, sustainable energy systems.